I want to tell you about the theatre company which was at our school last Thursday. It was at 11.15 a.m.. We arrived in the cafeteria at 11.15 a.m.. It was really beautiful and funny. Oh boy, the play was really exciting. You can learn a little bit about history if you see it and you have to laugh a lot. I liked it because the main character Tom had a silly mum and sister. All the kids in the audience screamed and laughed. The show was fantastic. Tom is a boy who kissed his girlfriend. I can’t believe that he kissed her at the moment when all the kids in the audience screamed loudly. His girlfriend had much better marks at school than he did. Oh, this made the show really funny and I think you would like to see it, too! I can’t tell you more because the bus is coming. See you soon!

I’m writing a blog post about the English theatre on Tuesday at school. Liz and Tom are best friends. Tom is not so good at school but Liz is a perfect girl. Tom travels to another world and meets Galileo Galilei, Michelangelo and Julius Caesar.

I’m writing a blog post from school. Today we had an exciting theatre play. There were many funny scenes.  The play is about three famous people. They are Julius Caesar, Michelangelo and Galileo Galilei. I think the theatre was perfect but one scene that was not so good was when they kissed. There were only three actors but the play had so many roles. I liked Tom because he was in all the scenes. It was so so funny and exciting.

I must tell you about the theatre. It was so strange, but it was cool. The funniest actor was Henry.  He sometimes screamed so loudly! I like the show because they did so many different things. We sat in the front row and took part. It was so funny! In the end the kids took many photos. All the actors were so nice!

I write about the “English Theatre Company”. It was so funny. That’s the story: It was a normal day for me: school, school, school! But it became better. The English Theatre Company came to our school. I was very excited!  But I had to wait until Tuesday. After three lessons in the morning we went to the performance.  The play was very funny! I recommend the theatre to you.

I really want to tell you about the play today. All the students in year six were at the play.

The play was funny. There was a boy named Tom. He went into the past and met some famous people, for example Julius Caesar, Michelangelo and Galileo. And don’t forget the caveman. And in one scene Galileo wanted to become a singer! But it was also really funny that the theatre was so interactive – this means that actors chose a few students which could take part in different scenes.

I liked the theatre because it was really funny.  I think all the people liked that the play was interactive because it made it funnier. My advice is that you see the show if you can.

I want to tell you about the theatre company which came to our school on Tuesday. It was very cool. I really had to laugh when I came to the stage during the play and they said I’m the sun and I was part of the play. In the end the actors kissed in front of us, but it was cool. They didn’t just play one role, they all had two or three roles. 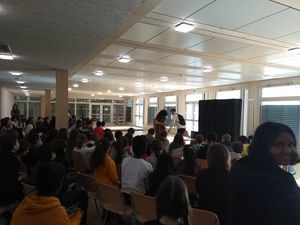 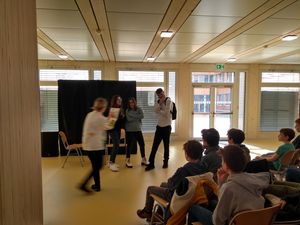 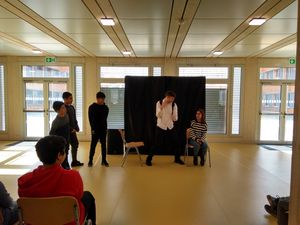 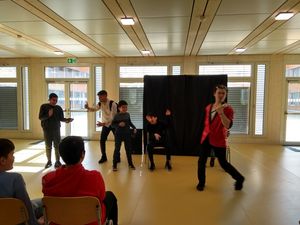 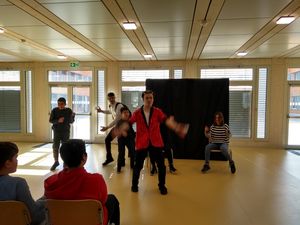